Adrienne and I “met” on Instagram and became (long-distant) friends offline. When I found out about her story, I asked her to share here, because it’s the perfect example of why we shouldn’t make judgments about other people’s family size, because we very rarely know all of the details.

Nobody gets married and expects to deal with pregnancy loss, infertility, and even the complete loss of fertility. So often couples experience hard things and think they are the only ones, but that is never the case. That’s one of the reasons we started Surprised By Marriage. Through the crosses we experience, God can draw us closer to him and closer to each other. -Jen

It wasn’t something we saw coming. I didn’t even know the disease had been silently destroying me for years until 2015, when I was 32 years old. By then, we had already lost so much.

My husband and I were married in 2009. We had committed ourselves to a chaste relationship so our honeymoon was deeply special. We also brought home a tiny souvenir, though it would be two more weeks before I got a positive pregnancy test. 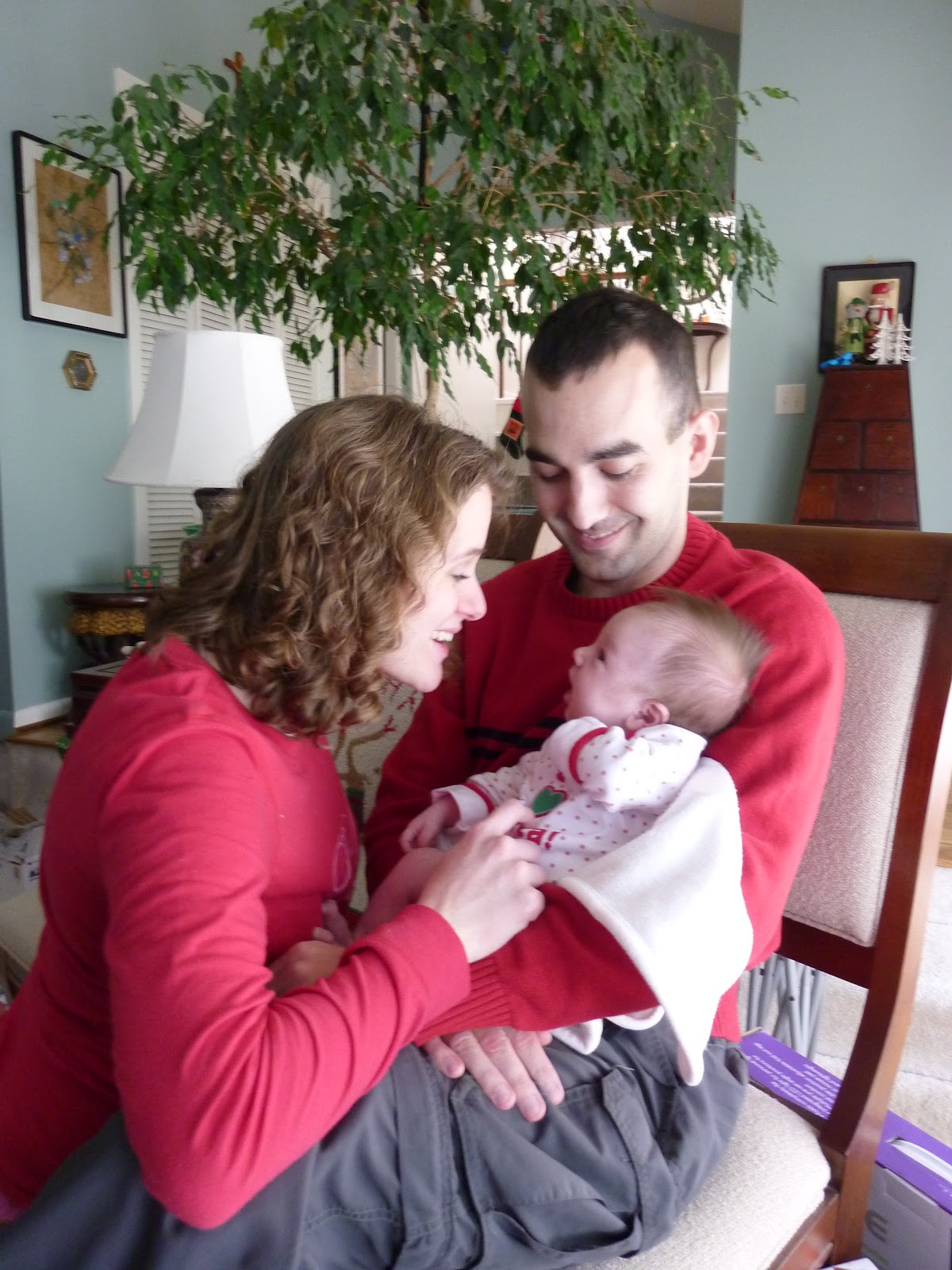 Three months after the birth of our oldest daughter, we got pregnant again. This would come to be the first devastating loss we’d go through as a couple. At thirteen weeks pregnant, I lost our son. My husband baptized him in our bathroom, and we buried him at the Veterans cemetery where the sun rose and set just behind his grave everyday.

Watching my husband cry as he baptized our first son in our home is burned in my memory forever. Losing our sweet John really taught us both how fragile life is. We both learned what a blessing both pregnancy and birth are. I would like to say the loss brought us closer, but this first loss taught us how not to grieve and process a miscarriage. We isolated ourselves from one another and failed to check in on each other. We didn’t come together in prayer. We were so broken in our grief, we were just trying to survive. It wasn’t until later that we circled back and admitted our mistakes during that time.

The pain from adolescence returns

We would go on to have two more girls. As a teenager and young adult, I always had terrible cycles, which caused me deep embarrassment and shame. While the difficult cycles eased during the first couple of years after marriage, they became increasingly terrible again after our second daughter was born. After each birth, when my cycles returned, they were worse than before.

Following a very difficult pregnancy, our third child was born in December of 2013. Shortly after her birth, our daughter was diagnosed with failure to thrive. By the time she was five months old, she had already been admitted to the hospital for RSV and had significant health issues. Our other daughters were ages 4 and 2 at the time. Needless to say, life was overwhelming.

In June 2014, my husband was unexpectedly deployed. Days after his departure, I found out I was pregnant again.

That night after testing, I miscarried again at five weeks. I could not deal with another miscarriage while my husband was gone. Without realizing it at the time, I went into denial and thought it was a false positive. He came home four months later, and soon after, we were pregnant again. Despite our youngest being less than a year old, we were thrilled. It was Thanksgiving morning when we found out, and I’ve never been more grateful on a Thanksgiving.

A pregnancy of joy and sorrow

That pregnancy, more than any others, felt laced with the Divine. There was a very distinct taste of Heaven during those first few months. I have never in my life been that completely joyful. I truly believe the Lord was preparing me for what was to come.

In 2015, eighteen weeks into the pregnancy, I lost our second son. It was our third and most devastating loss. I found out at a routine appointment, when the Doppler was silent again. I remember screaming over and over, “Please, God, not again!” That night, I was admitted to Labor and Delivery for an induction as a woman labored and gave birth to a healthy baby next door.

I felt as though I lived a sample of Christ’s Passion that night. My soul was burning in anguish as I labored through the night. A piece of me died that day. I didn’t understand why fertility and birth came so easily to some women but was so terribly hard for me. I wept to my husband, “What’s wrong with me?!”

After my stillbirth, I finally started getting answers at a follow-up with my gynecologist. I found out that I had a clotting disorder, as well as endometriosis with adenomyosis—which is basically endometriosis’s evil sister.

Unlike endometriosis, which is uterine tissue that grows on the outside of the uterus, adenomyosis grows within the walls of the uterus, slowly eating away and destroying the organ itself. There’s no treatment and no way to do corrective surgery (which can be done with endometriosis). With severe cases, most women end up needing a hysterectomy. My doctor told me I’d probably end up needing one, but that I had a good five years before then. I wish that had been true.

A month later, in August of 2015—thanks in huge part to our Creighton provider and my gynecologist—we found out I was pregnant again. My anxiety was extremely high during that pregnancy. I was on blood thinners, progesterone, baby aspirin, and extra methylated folate. My prayers for a healthy baby were both constant and desperate. I needed this child to survive.

One late night in April of 2016, after laboring for several hours, I gave birth to my third son. I held my son to my chest as both of us cried. I had finally given birth to a healthy son. God is so good.

Adenomyosis and its destruction

My cycles returned that summer, but my health deteriorated quickly. I was in bed all the time in immense pain. It wasn’t until November that I had another laparoscopy to remove endometriosis. My gynecologist found almost none…but he did find that the adenomyosis had eaten a hole through my uterus and destroyed it. My Creighton provider said that between my charts and laparoscopy results, we were sure to lose any pregnancies if we were even able to get pregnant again.

My health continued to worsen. I could no longer get out of bed most days. My entire abdomen was in debilitating pain, and I was hemorrhaging. In an emergency appointment, my doctor leaned across his desk. “I know you wanted a larger family. I’m sorry. But we have to do this.” He was crying. I grabbed my husband’s hand and wept.

The surgery was scheduled for his next available operating day. In the few days between, I begged for a miracle and pleaded for another answer. Proverbial doors and windows slammed in my face. I felt deep sweeping grief and shame. As a Catholic wife and mother, I felt I had failed. As I prayed through the emotions and we sought counsel from two priests, my husband patiently stood as a sounding board to my thoughts while affirming me we were doing the right thing—the only thing left to do. I needed a hysterectomy.

The morning of the surgery, I felt surprising peace. My doctor kept comforting me. My husband prayed with me. The day before, I had received Anointing of the Sick. I felt as ready as I would. Just before being wheeled back, I took my last pregnancy test.

The grief and shame of hysterectomy

For the year following the surgery, I felt deep shame at the loss of my fertility. There were no books that I could find by Catholic women in my situation. Many Catholic women asked when we were going to have more children. Someone told me that having a hysterectomy was against Church’s teachings and another told me I’d committed a mortal sin.** This just added to my grief, pain, and shame.

During it all, my husband stood by, affirming me that my womanhood was still precious, insisting that I’d been brave and strong. He was angry for me and grieved with me. My husband accepted with great peace and saintly strength the cross laid upon our shoulders. Looking back, I’m grateful for his strength and prayer during my physical and emotional recovery. He truly lived out, in his quiet way, “in sickness and in health.” It taught us the importance of communicating our feelings and being receptive to the other’s feelings. We realized how critical it is to check in on one another. While we did the best we could, there are always lessons on how we can be more fully present for our spouse.

I don’t feel the shame of the hysterectomy anymore. I can talk about it and feel the pain without it paralyzing me. The grief of losing my babies and my fertility will probably hurt for the remainder of my time in this life. But I’ve learned this over and over: God never lets Satan win. He always brings greater good out of suffering. Though I may never see it on this side of Heaven, joy always comes in the morning.

Adrienne Stravitsch is an Army wife and mother of four children on earth. She has experienced multiple pregnancy losses as well as infertility. When she’s not homeschooling or loving on her husband and children, she can be found with her nose in a book or writing behind a keyboard. You can find her on Instagram @stravgirl, or her blog, Trust with Wild Abandon.

**Church teaching regarding a hysterectomy is explained in this post on the Vatican’s website (as a follow-up to this document). A hysterectomy is licit when medical experts deem the uterus incapable of carrying a pregnancy to term.

2 thoughts on “The loss of fertility in our Catholic marriage: the grief, shame, and sorrow”

We all know the enemy hates marriage, but sometimes we don’t realize the ways in which he attacks a husband and wife! We’re talking about a few of them in our latest video 🎥 Link in stories/bio!
Happy New Year!! 🎉 We love picking a word and saint of the year together every year and decided to bring y’all along for the process! Find the video on our YouTube channel 🎥
These are the very relaxed faces of a husband and wife after a spa date night at home. 🤩 It’s been a busy and few weeks (months? year? 🫣), and we just really really needed to take some quiet time and relax together. A couple of rejuvenating face masks, a hot bath, a bunch of candles, calming music, and some wine? 🛁🕯🎶🍷 Yes. We’re here for it. 👏🏼
Happy feast of St. Nicholas!! It’s one of our family’s favorite days to celebrate. We usually fill stockings and this year we had even more fun with Christmas crackers from @gloriaandpraise 🤩 Use the code surprisedbymarriage to get 15% off your Christmas crackers!
It may not feel like winter in southeast Louisiana right now… but we still managed to enjoy a winter wonderland date night at home this week 🤩❄️☃️
First Sunday of Advent! A new liturgical year and a time to reflect on where we’ve been and what’s to come. A time to think about what’s really important and if we are in fact ready for Jesus to come.